Since my return, I have been swimming in requests to share some of the experiences and photographs of my recent travels—camping through the wilds of Africa. The shots seen here were taken at Chobe River, the Okavango Delta, and Etosha National Park in Botswana. As you know, all pictures were taken on my oobie-doobie camera that I cannot remember the name of.

Zebra are ubiquitous in Southern Africa, more common than horses in the British countryside, more common perhaps than water in these remote reaches of Africa—but these are not your usual horses, these are the horses of Africa: wild, flighty and free-roaming. Perhaps of all great creatures that roam these harsh lands, zebras are the most striking, being quite remarkably banded in contrasts, but in all ways besides their striking stripes, their appearance and behaviour mimics our more well-known equine friends.

Late at night, lying in my tent, I was kept awake by playful herds of zebra galloping by, their hooves trembling the ground beneath my sleeping bag only twenty meters away. There was nothing but the African dirt and a few strips of canvas between me and them—it was the very best of ways to be awoken.

I heard several possible theories for their strikingly stripy appearance, the most convincing was that the stripes confused predators causing them not to be able to differentiate one zebra from another, making it increasingly problematic to single out any individual for dinner. 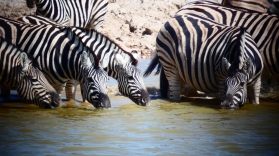 During my observations of these creatures, it struck me that they are also a little like dominoes. If one gets spooked—which happened a lot (and seemingly for no reason), they would rear, and gallop away in fifth gear, comically flaring their nostrils, and kicking up their heels in a frenzy of black and white and hair and hooves. This spreads quickly like a disease from one stripe to the next, a flood of dominoes, an avalanche of stripes, and before you know it, there is a stampede of lily-livered, wide-nostrilled ned-neds all in a tizzy and dancing dust up behind their hooves—always seemingly for no reason.

The springbok is another commonplace creature in southern Africa. They are exquisite in appearance—perhaps the Angelina Jolie or Jennifer Anderson of the animal kingdom. Their movement is almost balletic, weightless gliding and prancing, with heads held high on graceful tips of toes. They only have one let down—they are far too tasty! It is no surprise that their bones litter game areas. Sadly, being Angelina pretty was not enough to deter the lions from figuring this out too.